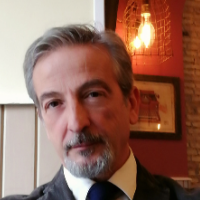 Emilio F. Campana is the Director of the Engineering, ICT, Energy and Transport Department of the National Research Council (CNR) of Italy, which includes 15 research institutes and about 1100 researchers, covering the areas of Civil and Industrial Engineering, Computer Science and Informatics, Systems and Communication Engineering, and Applied Mathematics.
EFC got his degree in mechanical engineering (cum laude) and his PhD (in Fluid Dynamics) from University of Rome, “La Sapienza”. EFC has been researcher at the IBM – ECSEC (European Center for Scientific and Engineering Computing), and successively joined as researcher, the National Maritime Research Centre (INSEAN), eventually becoming the INSEAN Director, between 2010 and 2017. During his research activity he has been Principal Investigator of several EDA (European Defense Agency) and ONR (Office of Naval Research, US Navy) projects. In his scientific career EFC has published about 200 peer-reviewed papers in international journals and conferences. EFC is the scientific coordinator of the National Technology Cluster of the Blue Growth, a national alliance promoted by the Italian government, with more than 90 partners, including industry, academia and regions.

He is the Italian national representative in the:
- JPI Healthy and Productive Seas and Oceans, the European platform for the harmonization of marine and maritime national research programs;
- WATERBORNE Technology Platform, the European platform for the maritime transport, chairing the Blue Growth Committee of the WTP
- NATO Science and Technology Board, the highest scientific board of the NATO;
EFC is the recipient of the:
- American Bureau of Shipping award (2009) for the best paper presented at the SNAME (Society of Naval Architects & Marine Engineers), annual meeting;
- Scientific Achievement Award (2012) assigned by NATO – RTO (Research and Technology Organization);
- George Weinblum Memorial Lecturer (2013-2014) assigned by the German Institut für Schiffbau of the University of Hamburg and by the Naval Studies Board of the US National Research Council.